Limit AdWords Overdelivery to Any Amount You Want


Google announced that daily budgets will now be able to overdeliver up to 100% rather than 20% as had been the case since the earliest days of AdWords.

Overdelivery allows Google to help advertisers meet monthly budget targets by making up for slow traffic days by spending more money on high volume days. They assume that advertisers will divide their monthly budget by 30.4, and set this as the daily budget. Then when there may not be a whole lot of traffic on Saturdays and Sundays, Google can exceed the daily budget on Mondays and Tuesdays when there might be more people looking for what the advertiser sells. 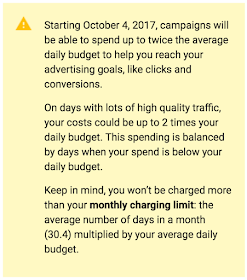 To truly control budgets they way you need, you'll probably want to use tools, automations, and AdWords Scripts. Here's a very basic script that lets you enforce a more strict overdelivery for a campaign. The script assumes that your daily budgets are the baseline of what you'd like to deliver. Use the setting 'allowedOverdeliveryPercentage' to control a maximum spend for the day by setting a value between 0% and 100%. The script fetches every active campaign's daily budget and accrued cost for the day. If the cost exceeds the daily budget + the allowed percentage of overdelivery, it will label that campaign and pause it.

Important Notes:
If you need more control over budgets, and you don't want to do any coding, consider our prebuilt scripts available as part of an Optmyzr subscription (Optmyzr is my company).